Annual Parish Meeting - Wednesday 12 May at 7.00pm (If permitted)

The County is Rutland County Council.

In memory of His late Royal Highness Prince Philip, Duke of Edinburgh

It was announced on Friday 9 April 2021 that His Royal Highness Prince Philip, The Duke of Edinburgh, has passed away at the age of 99.

A period of national mourning has commenced and will conclude on 17 April.

There will be a national one minute silence at 15:00 on Saturday 17th April to coincide with the Royal Ceremonial Funeral of His Royal Highness The Duke of Edinburgh in St. George's Chapel.

As we are now in a period of national mourning the MPC meeting which was to be held on Wednesday 14 April has now been rescheduled to Thursday 22 April.

Co-option of Parish Councillor - Applications by Friday 7 May

Following the resignation of Terry Helsdon MPC are intending to co-opt a Parish Councillor. The attached documents set out the background, eligibility/disqualification criteria and application process. If you are interested in joining the Parish Council and have any queries please speak to Roger Hornby (PC Chair) or any other councillor.

Manton Parish Council currently have a vacant half-plot and a vacant quarter-plot at our Allotment site on Lyndon Road. If anyone is interested in taking on a plot for growing vegetables and/or flowers please initially contact the Clerk,Lawrence Webster, at clerk@mantonparish.org.uk. giving your name and contact details.

Your application will be on a "first come first served" basis as we have this limited... Read More »

This month's magazine is attached and may also be accessed on the Rutland Water Benefice weblink below.

The Lord-Lieutenant of Rutland's initiative on Dying and Bereavement

Dr Sarah Furness PhD (The Lord-Lieutenant of Rutland) has launched, and is Patron of, an initiative called "Dying Matters in Rutland" with a website, brochure and video. The following is an extract from a letter from Dr Furness to Parishes: 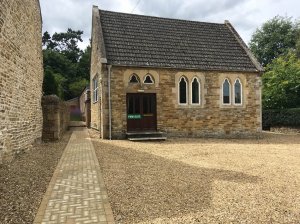 The Village Hall committee commissioned a new path to improve access to the village hall which has now been completed.

The 2019/20 AGAR including Accounting Statements and associated papers are available at the menu selections following:

"About the council > Finance and administration > Financial information"

Annual Parish Meeting - Wednesday 12 May at 7.00pm (If permitted)